Ulcerative colitis is a chronic, relapsing-remitting disease caused by inflammation of the colon. While the cause is not known, there is a presumed genetic component to susceptibility as well as environmental triggers of the disease. Symptoms vary in severity and frequency and include frequent stools, diarrhea, blood in stool, abdominal pain, fever, weight loss and anemia. Ulcerative colitis patients may also experience extra intestinal manifestations such as arthritis and dermatological or ocular manifestations. Moreover, patients have a significant elevated risk of developing colon cancer.

Current treatment is not sufficient

There is no cure for ulcerative colitis, and most patients require life-long medication. The goal of treatment is to induce remission (diminishing of symptoms or symptom free). If achieved, this is followed by the administration of maintenance medications to prevent a relapse of the disease. Standard treatment for ulcerative colitis depends on the extent of colon involvement and disease severity and includes anti-inflammatory drugs, immunosuppressive drugs, as well as biological therapies targeting specific components of the immune response. For patients with chronic active disease not responding to medical therapy, colectomy is often the only remaining option.

The quality of life for patients suffering from moderate to severe ulcerative colitis is low and comparable to cancer and hemophilia with high incidence of anxiety, depression, unemployment and sick leave. Current treatment options have limited efficacy and problems with severe side-effects. In addition, a substantial proportion of the patients will eventually develop tolerance to the treatments. Prospects and treatment options for patients not responding to conventional or biological treatments are limited, and leading experts in the area have encouraged the development of new therapies that can offer improved healing of the colonic mucosa and improved long-term effects.

Surgical removal of the colon by colectomy is the only remaining treatment option for patients not responding to available medical therapies. Colectomy with its need for a colostomy is a highly invasive surgical procedure associated with a significant risk for short- and long term complications, including post-operative complications, infections, abdominal pain, and infertility. Moreover, patients often experience a low Quality of Life (QoL) post surgery, which is associated with physiological and psychological co-morbidities, high unemployment rates and high rates of sick leave.

Cobitolimod is a potential new medication for patients with active moderate to severe active ulcerative colitis – a chronic inflammatory bowel disease. Cobitolimod is a first in class treatment that can provide a local anti-inflammatory effect, which can lead to healing of the mucosa and improvement of clinical symptoms. Cobitolimod is has a very limited systemic absorption. This gives the drug a favorable safety profile, in sharp contrast to many approved treatments. In January 2016, WHO recommended the INN name cobitolimod. The substance is also known as Kappaproct® and DIMS0150.

Cobitolimod is a DNA-based ImmunoModulatory Sequence (DIMS) that is administered locally inside the large intestine, where it binds to Toll-like receptor 9 (TLR9) present inside immune cells as well as on the surface of epithelial cells. The binding triggers the cells to produce anti-inflammatory cytokines, which are agents that play an important role in reducing the inflammation and in the healing of the mucosal wounds caused by the disease.

Cobitolimod has a very limited systemic absorption. This is an important feature, as it limits the risk of systemic side effects from the treatment. There have been no safety issues in the more than 416 patients dosed to date. This is in sharp contrast to many approved UC treatments, which are associated with severe side effects such as osteoporosis, diabetes, serious infections and malignancies. The topical administration also provides a quick onset of action compared to systemically administered drugs, which is highly valued by the patients. 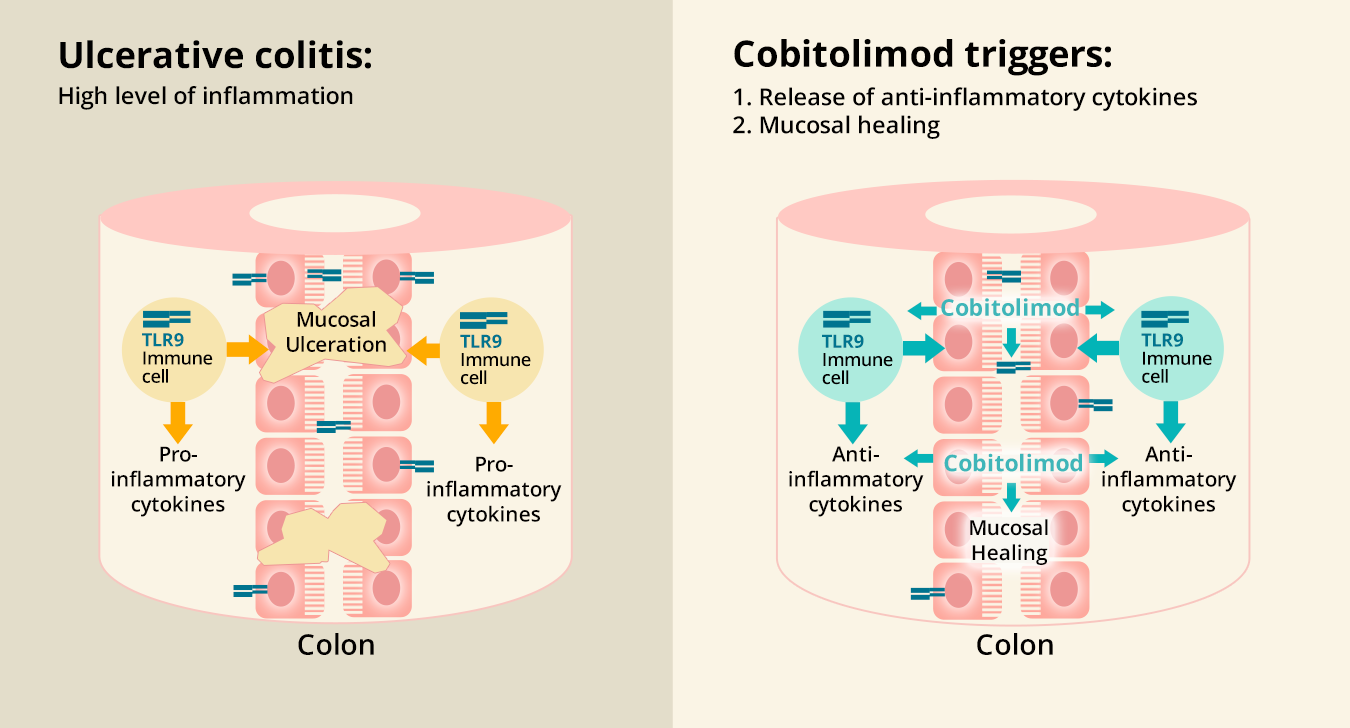 Cobitolimod has achieved clinical proof-of-concept in moderate to severe active ulcerative colitis, with a very favorable safety profile. Data from four placebo controlled clinical studies show that cobitolimod have statistically significant effects on the endpoints that are deemed most relevant for the disease, both from a regulatory and clinical perspective. These include the key clinical symptoms such as blood in the stool, stool frequency and healing of the colonic mucosa. In addition, cobitolimod has in both pre-clinical toxicity studies and in clinical trials shown to have a very favorable safety profile.

A pilot study in 11 patients with moderate to severe inflammatory bowel disease resulted in a clinical response to cobitolimod treatment after one week in over 70 % of the patients. In addition, cobitolimod induced a sustained clinical response during 3 months and was safe and well tolerated.

A phase II study including 151 patients with mild to moderate active ulcerative colitis eveluating four different dose levels of cobitolimod treatement confirmed the good safety and tolerability seen in the previous study. Although statistical significance was not achieved, a numerically higher proportion of patients in some of the dose groups achieved clinical remission compared to patients in the placebo group.

A second phase II trial was conducted in 34 patients with moderate to severe ulcerative colitis, who did not respond to corticosteroid therapy. The study revealed a clear positive effect on established disease markers (DAI sub-scores) such as blood in stool and histology. There was a trend of sustained clinical response at week 4 and 33 % of the patients treated with cobitolimod experienced histological remission.

A compassionate use has been performed in 14 patients elected to undergo colectomy. 86 % of the patients experienced clinical response and 79 % clinical remission at week 12. The rate of colectomy among the patients was less than 10 %.

InDex Pharmaceuticals has performed a double-blind, placebo-controlled, randomized clinical study called COLLECT in 131 treatment refractory moderate to severe ulcerative colitis patients. Top-line data was released end of June 2014. The study was conducted in Czech Republic, France, Germany, Hungary, Italy, Poland and the UK. Patients were treated with two single rectal 30 mg doses of cobitolimod four weeks apart and then followed for a total of 12 months. The patients were allowed to take their usual ulcerative colitis medication during the study except for cyclosporin, tacrolimus, TNF-alpha inhibitors or similar immunomodulating drugs. The trial aimed at assessing the efficacy and safety of cobitolimod compared to placebo in chronic active treatment refractory chronic active ulcerative colitis patients. Cobitolimod demonstrated statistically significant improvement compared to placebo for the secondary endpoints; symptomatic remission (blood in stool = 0, number of stools/week <35) at week 4 and 8, registered remission (Rachmilewitz/CAI score of ≤4, and an endoscopic Mayo score of 0 or 1) at week 4 and rate of colectomy by week 22. The authorities are currently considering the symptoms of blood in stool, stool frequency, and mucosal healing (endoscopic remission), to be the most important endpoints to show clinical efficacy to achieve market approval. Remission based on these three variables showed a significant improvement in the cobitolimod-treated group compared with placebo at week 4. The treatment effect seen was in line with or better than what the approved biological drugs have shown in their phase III studies. Cobitolimod was well tolerated and no safety signals compared to the placebo group were evident. An unexpectedly high proportion of patients in the placebo group achieved remission as defined by the primary endpoint (Rachmilewitz/CAI score≤4) at week 12, and the study showed no difference between treatment groups for the primary endpoint. This endpoint is no longer considered by the regulatory authorities to be a relevant definition of remission.

Based on the encouraging results from earlier studies InDex has performed the phase IIb study CONDUCT to evaluate other doses and dose frequencies than investigated in previous studies with cobitolimod. The study objective was to identify the most efficacious dose and dose regimen for further development. CONDUCT was a randomised, double blind, placebo controlled study for evaluating cobitolimod’s efficacy and safety in inducing clinical remission compared to placebo. The study included 213 patients with left-sided moderate to severe active ulcerative colitis, divided into four treatment arms receiving cobitolimod and one arm receiving placebo. In addition to cobitolimod or placebo, all patients continued with their standard of care treatment. The patients were followed for a total of 10 weeks. The top line results were announced on August 27, 2019 demonstrating that the study met the primary endpoint of clinical remission, with a superior efficacy in patients receiving the highest dose of cobitolimod compared to placebo. Cobitolimod was well tolerated at all dose levels and no differences in the safety profile were observed compared to placebo.

Ulcerative colitis is a chronic inflammatory bowel disease of unknown cause.

A substantial percentage of patients with moderate to severe active ulcerative colitis will not respond to available therapies or will eventually develop tolerance to treatment.

Cobitolimod is a first in class treatment that provides a local anti-inflammatory effect which in clinical trials has shown to result in significant improvements of the major clinical symptoms.

Cobitolimod has very limited systemic absorption. This gives the drug a favorable safety profile, in sharp contrast to many approved treatments.